Thanks to COVID-19, the Carolina Gaming Arena had to postpone, indefinitely, its Grand Opening event in March 2020.  But that didn’t stall the drumbeat of students who wanted a better resource for gaming at the University of North Carolina at Chapel Hill.  Instead the mass exodus of students as they moved back to their hometowns, and many of them sharing a roof with their siblings and parents who were also working from home, highlighted the need for a world class infrastructure if competitive gaming was going to see success at UNC. 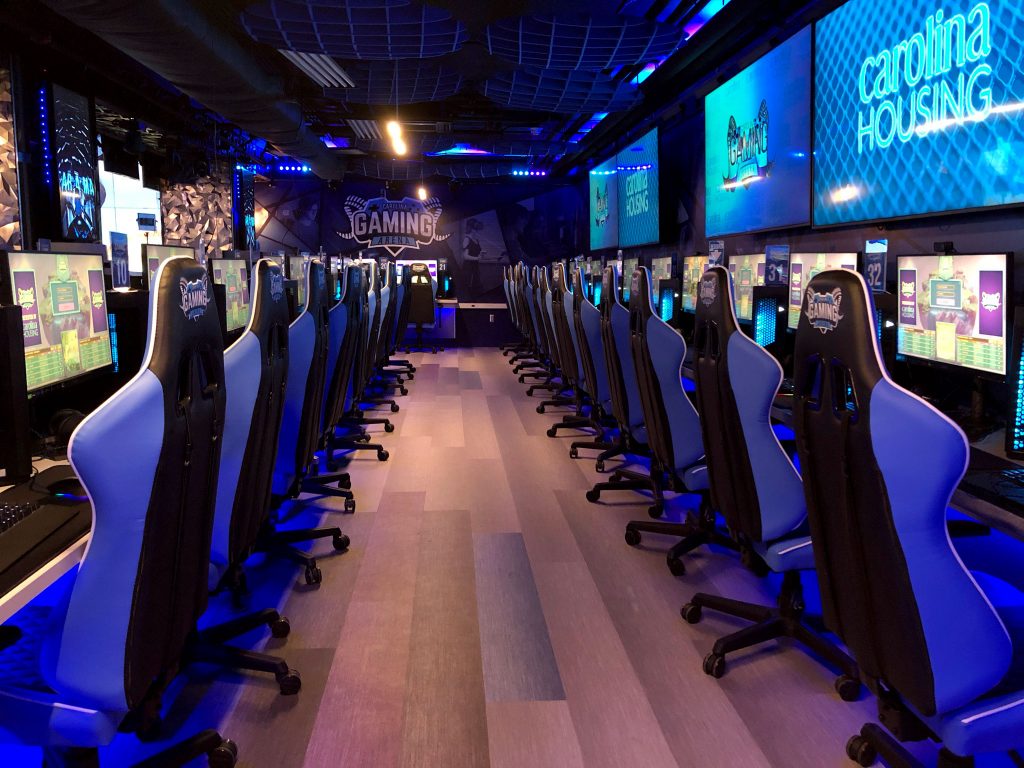 While UNC remained in remote instruction mode in the spring and summer semesters, the ITS ResNET team continued to work on the final details of the Carolina Gaming Arena.  The expectation was to open the space in late August after students have moved onto campus and completed at least 2 weeks of instruction with marginal gains in the infection statistics on campus.  Unfortunately the reality brought on a massive pivot as thousands of students were again sent away from campus, leaving behind a skeleton residential population and forcing common spaces to shutter.

But still the need existed.  And so the CGA coordinated with the UNC Esports Club through their colleague Matthew Belskie to explore safe ways the competitive teams could utilize the space for practice and streaming events.  The idea was that the brand could be built, and a community could be assembled online, if not in person.  And so we began our march.

So far we have hosted the League of Legends, Overwatch and Valorant teams in the Carolina Gaming Arena to strong positive feedback.  Beanfrog stated that “it’s incredible being able to use a training space that’s on par or better than what pro teams have access to” while his team member Peekachu stated that “having a place to play was a really good team bonding experience.”

We have also been very appreciative of their patience as they have been the first students to play in the arena, and we have worked out technical issues and learned how to produce a better show and experience for the players.  We own the fact that we’re still learning as well, Carter was kind to point out that “this was very quickly resolved and we had zero issues the second time around.”

So what exactly does that arena offer that allows the players to compete on a grander scale?

One feature of the arena is a casting area to really add quality for the spectators.  Play by play analyst for League of Legends Mark “Mak Dewey” Drewery summed it up best by saying, “As caster, getting to interact with the players directly and to see them play live while having a casters desk area is so much better than just sitting at my desk at home.” 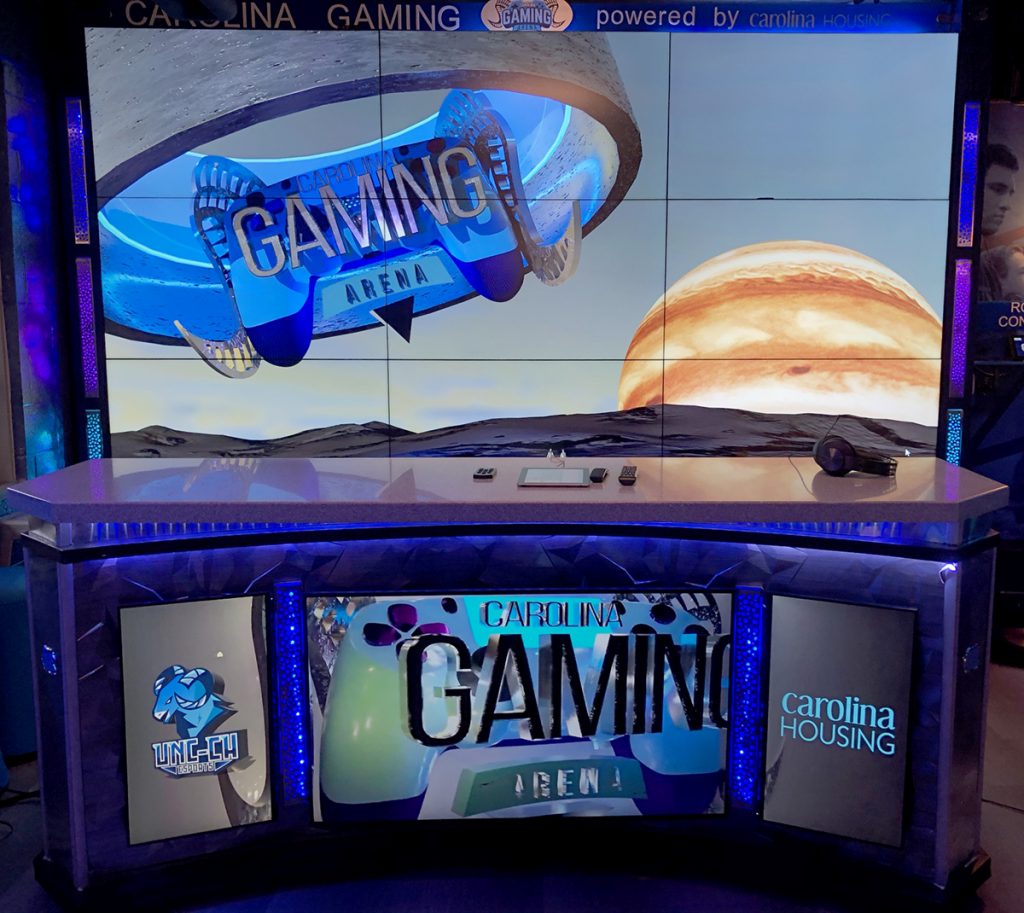 The anchor of this area is a casting desk that allows a commentator to give play-by-play of the action happening in the arena, and for that all to be packaged for Twitch.  This is placed in front of the 16′ video wall and is complimented with three video surfaces to enhance the quality of the visuals provided to our fans.

We’re then running Streamlabs on a Lenovo Legion T730 just like we use for the gaming stations, primarily in order to leverage the computational and graphics power to manage our 24+ video inputs and various games that need to run locally for spectator capture.  This casting cart is also outfit with a screen facing the casting desk so the host can see the feed and chat live.

The pinnacle of the arena, however, is the bank of 36 Lenovo Legion T730 towers, along with gaming monitors and peripherals.  This is where the real action of the arena is centered, and this is giving players an added advantage during streams or practices.

Each stations is connected directly on a Cat6a line to a X460-G2 switch provided by the networking provider of the Carolina Gaming Arena, Extreme Networks, which is being supplied data by our institutional fiber network.

Students have shared that the speed of both the network and the machines and monitors is a great improvement over their regular setup and they prefer to practice in the arena as a result.  One student shared that “objectively, the hardware is also insanely good, allowing all members of our team to play on an even playing field with any other team. And all the hardware and software is integrated together very well, allowing all the computers to be able to play over 50 games virtually lag-free. “

All of that software has to be maintained, so we also have a Lenovo Workstation set up to run debian and ggRock, which supplies our image to each machine in the arena and allows lightening fast pxe boot and updates for every machine.  This was a critical step in the configuration of the arena, because we can very quickly deploy updates to a game by updating one machine, instead of having to update all 36 machines.  Considering that we’re offering over 100 games on each PC in the arena, this saves days of work each month.  The coordination of this effort would not have been possible without the leadership and expertise we received from Lenovo Esports.  They assisted the management staff in navigating hardware choices, configurations and partner relationships that led to a seamless experience for gamers.

While the Carolina Gaming Arena is still very new to having users, we’re trying to make the most of it and offering practice time during regular business hours to any competitive team and working with them to produce streaming events several times throughout the semester.

For now, we’ll leave you with our favorite piece of feedback received from player Kulasingam: “It’s impossible to overstate the importance of building a state of the art gaming arena at our school. As players, it legitimizes our passion and validates the time and energy we’ve put into practicing and improving. For the community as a whole, it creates awareness for esports and establishes a safe space for people with similar interests to interact and spend time enjoying the hobbies they love. “ 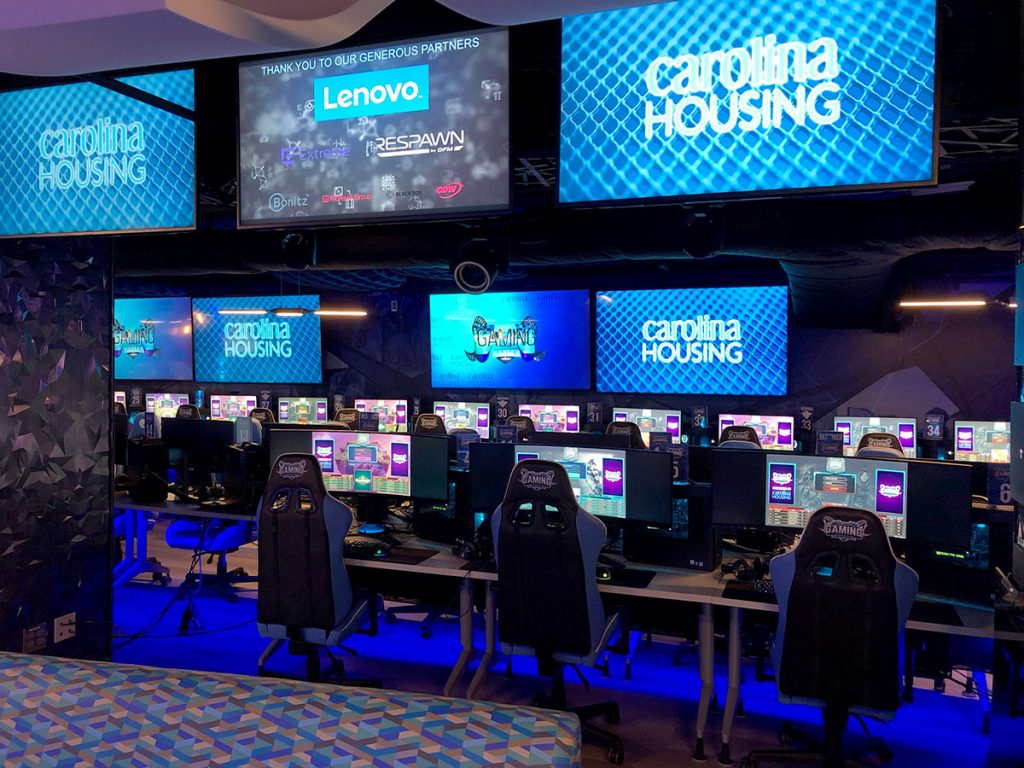 Authored by Lee Hyde with contributions by Matthew Belskie and members of the UNC Esports Club.